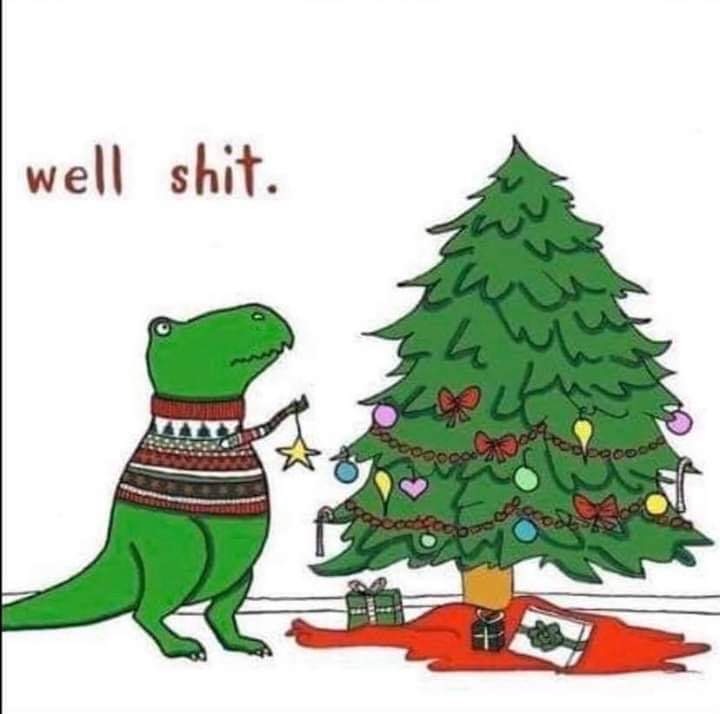 As we find ourselves in the midst of the winter holidays, this image came across one of my social media feeds and I had a good chuckle as I often do when I encounter one of these “T-rex trying” memes. For those who haven’t met me in person, my arms are very similar to our three-fingered friend and I have very similar difficulties in reaching not-so-distant items, so I have a sort of kinship with this guy.

But like our extinct tragic hero, I try not to let it get me down. I embrace our common challenges in life and proudly wear my “T-rex trying” t-shirts out in public. Whether it’s the worst drummer ever, the ‘unstoppable’ t-rex with a pair of grabbers, Rex trying to do push-ups, or Rex dreaming and wishing for strong, muscular arms while attempting to rub a genie’s lamp that is just out of his reach, I get a chuckle with each rendition of the short-arm woes. I also enjoy seeing the reactions of people out in public!

There is often an initial reaction similar to mine: a chuckle followed by, “oh that’s a good one!” Then, depending on how well this person knows me, there can be an awkward pause while the other person is trying to figure out what’s actually happening here. Is it OK to laugh? Am I making fun of him? Is HE making fun of himself? This isn’t politically correct, is it? But it IS funny… what am I allowed to do here??

In this situation, yes – by all means, please laugh with me. Share that positive attitude with me and laugh at the situation. Being sad and depressed isn’t going to make my arms longer or help me reach things on the top shelf. We may as well share some humor of me both commiserating in the daily frustrations of the dinosaur, and ironically wearing the funny t-shirts!

But like with so many things, it’s all about the intentions behind the words and the laughs. Laughing along with my t-shirts or the “Rex” monogram inside my custom suit jacket is ok. Making fun of a reporter with my very same condition at a campaign rally is not. Mimicking someone’s stutter to imply that they’re stupid is not ok. To paraphrase a great (and sometimes debated) quote, let’s strive for a day when we will live in a world where we are not judged by our appearance but by the content of our character. While attacking or criticizing one’s appearance is one of the easiest things to do, it is neither productive nor effective for furthering one’s objectives. Let’s keep that in mind during this time of joyous celebration as well as throughout the year.

This site uses Akismet to reduce spam. Learn how your comment data is processed.

Stepping out of the guilt.shame.fear and coming home to the real [gay] me that's been there all along.

The World Through My Glasses

Understanding ourselves and the world we live in.

Thoughts on life... by Donald B. Wilson

Not so rare (not so special)

A lifestyle blog for caregivers